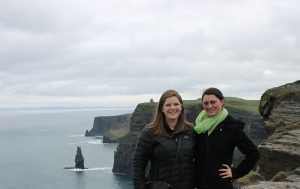 My roommate and I at Ireland’s famous Cliffs of Moher./ PHOTO BY Majella O’Connell

My roommate and I decided to ditch city living for the weekend and to head off to the Irish countryside for a nice visit with her aunt and cousin. However, to get there, we had to do the unimaginable — fly with Ryanair.

After hearing horror story after horror story about their inflexible booking, jam-packed planes and poor customer service, we were hesitant (to say the least) to book our tickets. Eventually, though, we took the plunge and ended up with two seats on one of their infamous blue and yellow planes.

To say the landing was shaky would be an understatement, but the trip wasn’t actually all that bad — their rebranding efforts must be working, because we really didn’t have any problems.

After we landed, we were greeted at the airport by my roommate’s family and had a really fun and relaxing night at their adorable house in Limerick, Ireland. I played with their two cats, drank lots of wine and watched Animal House before going to bed to get some shut-eye for a Saturday of sightseeing.

We started the day off right with an Irish breakfast that included eggs, sausages, white pudding, toast and a strong cup of Irish tea. Apparently, the whole country is divided between Barry’s tea and Lyons tea (My roommate’s family is pro-Barry’s).

After breakfast, we drove up the western side of the country toward the Cliffes of Moher, listening to the Munster rugby game on the radio all the way. Munster is my roommate’s family’s preferred team and one of four professional provincial rugby teams in Ireland.

This weekend, they competed in the quarter-final round of the Heineken Cup. We stopped at a pub for a pint and to watch the second half of the game on television. We had a plan to stop in a tiny little town but upon doing so, were told that the one pub in the entire town with a television wasn’t going to have a subscription to Sky Sports Network until Monday, so we kept on driving to a slightly bigger town and set up camp there instead. Munster won handily over Toulouse and advanced to the semi-final round.

The main event of the weekend, however, was our trip to see the stunning Cliffs of Moher in County Clare. I had long heard my roommate’s stories of her dad daringly hanging over the edge of the cliffs and about the ragged coastline, so I was excited to see them in person. They did not disappoint! We had a great day walking up and down the cliff walk.

Later that night, we headed to the pubs downtown and got to see a traditional Irish music session, where a few musicians gather around a table and play Irish music for everyone (my personal favorite is “Whiskey in the Jar”). A local band called The Lemon Suckers got on stage to end the night with an awesome set of covers. It was really fun and the atmosphere downtown was perfect after Munster’s big win.

It was great to spend a few days in the gorgeous countryside and also to curb our spending — if only for a little while. I joke about it, saying “Moher money, Moher problems,” but the amount of money that we’ve all spent is pretty horrifying — we’re all getting a little nervous that we won’t be able to afford our last few weeks here. Still though, we all agree that even if we all go bankrupt, it will have all been worth it.